Day 1 was completely full with activities, as you will watch in the video. I hit 110 kilometers on my first day but have had shorter days following that - only because I am getting a late start every day. Often I am not starting until 10:00 already. It's not that I am sleeping in. I am still waking up at 0600. It's only because I have so many routines in the morning and plod along.

Day 1 was actually a high mileage day when I look back on it.

I'm looking for a larger pot for cooking. I know exactly what I want but can't seem to find one in the towns I have been passing through. I need to be able to stir more freely what I am cooking without fear of it running over. What I am currently using is too small. I can actually cook more and better using my tin coffee cup (hot chocolate) rather than my boy's scout pot.

My cooking pot is too small

Since it is early in the season, I am often the only biker in the campsites. Not busy at all. I like having the whole place to myself. I suspect it will start to get busy in June and July.

Back to Day 1: I could not find a good "waters edge" in Astoria where I could safely, and easily "touch my bicycle to the Pacific ocean." So I decided to climb down to the rocks and splash the water with my hands. I had it on video but that video clip got corrupted and I could not use.

I met a Sears, blue collar worker, who gave me the $200 proclaimed about in the video. What a great way to start the day! I went immediately to Wells Fargo across the street, to make the deposit along with some other money I had, so I am not carrying so much cash with me - in case I get robbed or in case I lose or forget my purse somewhere.

The problem with picking up all the coins, as in the video, is the extra weight. I still am carrying them. I could cash or spend them, but in actuality, I really do save these types of "road coins" back in the Philippines. I suppose I will spend them. I can't bring them back to the Philippines and I will not carry them the whole country.

Have you every heard someone say, "That really took my breath away?" Well, twice I had that experience when passing or happening around a corner to see the Pacific ocean near the Cannon Beach, OR area. There were two massive scenic scenes that really "took my breath away" and I thought I saw everything by living in the Philippines for over 30 years. Cannon Beach area was amazing indeed.

I still prefer to get directions from people more than my map. It must be from my living in the Philippines style. When I am not sure about the "map corner," people are helpful.

I think seeing the pack of seals at Astoria was my first. I wish I had a lens and type of camera that could zoom in from a distance. This type of camera is still on my wish list but in point and shoot style with 10X or more zoom. This would be helpful. I could of used it for twice when I was trying to "shoot" some deer.

A pack of seals on Day 1 in Astoria pier

I met another guy named Mitchel but only with one "L." He was a can collector. Aluminum cans bring 10 cents in Oregon. That's a lot! 10 cans equals $1

I met a Spanish guy named Simon who is biking from Seattle to San Diego (North to South) of America. He has been all over the world, he says. Sometimes I wonder how these "full time travelers" can afford their trips?

Two other guys I met were from Scotland and England. They were biking from Vancouver, Canada to Mexico. The Scot is a global traveler. You can read about his journeys at www.worldcycletour.co.uk

I continue to give my Bibles away at the rate of 2 to 3 per day. Jim, the Drone guy, the single mom, the smoker lady, and three kids at Subway in Harrisburg and the grey haired lady at the store in the middle of nowhere. That has been working pretty good. I do give away a lot of my business cards. That is really handy. I'm so glad I brought these. I have 1,000 available for the trip.

This is the back of my business card.

Day 2 was hitting that logging road with gravel. That was an intense uphill cause it was so steep. That was my highest, steepest climb in my first five days. The map says it was 640 feet. It will be in one of my future videos.

I came across some cherries. He said it was the first day of release. I bought a whole bunch. Ate them for the next two days, actually. I gave my business card to two ladies buying milk for their Filipina friend who can't leave the store she runs.

Of course, when in Oregon, you will see Marijuana stores along the road since it is legal here. Can you imagine?

On Day 3, was the day I had squirrels all over my campsite. They were so friendly and would eat out of your hands. See picture above. I'm learning to cook better now and had my oatmeal for the first time. It's great! I'm actually eating some right now while typing this news.

I had many squirrels visit me on Day 3 morning

I was so impressed to find USB outlets in the Bear Lockers in the campsite. What a genius invention. The park worker said they are new for this year as a result of people's comments and complaints. I suggested they add normal outlets also for our plugs, laptops and other chargeable items that are not USB related.

Campsites have generally been $8 or $10 which is a fair great price. I like it. I feel sorry for the other campers that are not hiking or not with bikes. Their fee is normally in in $31 range for Oregon.

I learned during Day 3 that when it is cold, I can put my stocking cap under my helmet to cover my ears. Good idea. I also discovered that the two bolts that came with my kickstand when I bought it are not the perfect fit for the threads in my bike frame. They were very very close but not exactly compatible. I found the proper bolts at a ACE hardware but now the kickstand is not made from a durable type of metal and the hole gets bigger cause the metal is too soft. I'm still thinking how to reinforce this "aluminum" screw holes. Give me time to think about this one...

Two things I learned about setting up my tent. Maybe three things: You need a rock available to pound the stakes when the ground is simply too hard. You also need to always count your stakes before packing. Surely you will lose one her or there if you don't. Be sure to zip shut all the doors of the tent before packing away. It will make it easier to set up and stake down later the next time and it seems better to "cook and eat" immediately upon arrival at the campsite and set up the tent last - especially if it is cold.

I also learned to ASAP change clothes from wet riding clothes to dry camp clothes after arriving at the campsite. When it is cold outside, you get colder faster and it is hard to recover. IT is terrible when you are trying to cook or trying to set up your tent when you are cold and suffering. You nearly don't even want to eat because you are so uncomfortable. Change clothes right away. It makes a big difference.

On Day 4, I met a guy named Greg, at the gas station, that needs a chiropractor so badly.

This is Greg who needs his neck aligned.

I stayed in a campground that bordered a RV parking area. Some of the people here have lived for 9+ years in this lot. They pay $400 a month + electric - maybe $50. Cheap and simple way to live. Linda, let me use her outlet to charge my computer.

I was trying to confirm housing at YWAM in Salem, Oregon but they were full. I tried to persuade them to let me just set up my tent but they refused. It turned out to be a good thing because the direction to take me to YWAM Salem would of been really off my route anyhow. In my mind, I was convinced, earlier, that I needed to go through Salem, when in fact, I need to bi-pass Salem and go South towards Eugene, OR before crossing the mountain. Maybe GOD was the one that really closed that door for me? 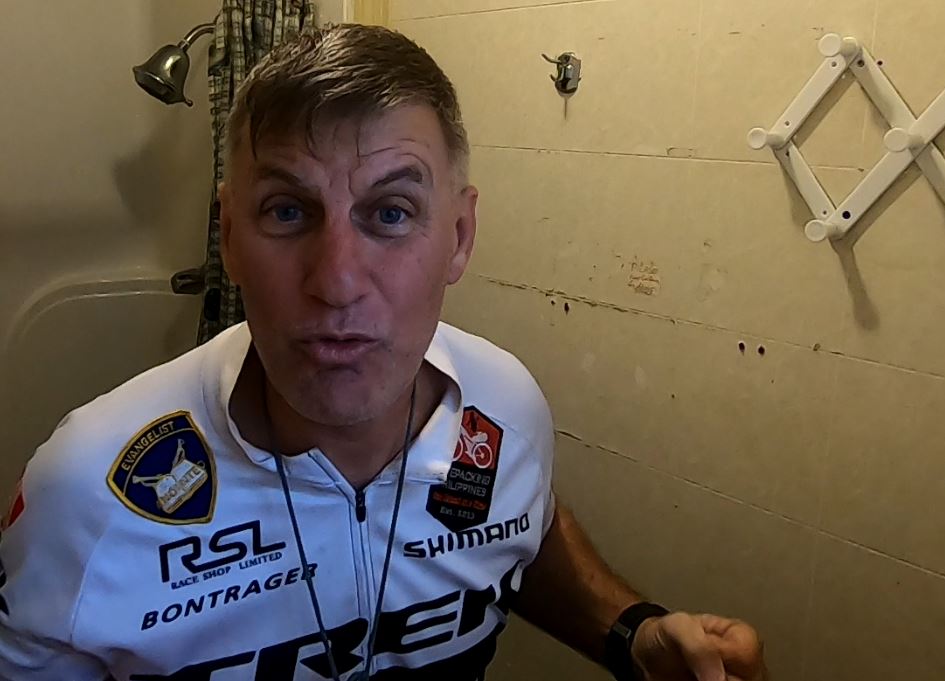 On Day 4 evening, I really had a hard time finding the Fairgrounds/campsite because there was no one parked there. It was all so vacant. I went past it nearly twice until I got a closer look and found the sign. Again, I had the whole place to myself and they opened up the shower in the morning for me. When you are the only camper, you get all the hot water to yourself! haha

My campsite at the Fairgrounds. I was the only one.

On Day 5, which would be May 10th, is when I used the shower at this Fairgrounds. The Fairgrounds was set up perfectly in the right direction to go South. Thank GOD I never took that Salem spur route.

Today, I had a surprise visit by another preacher friend on the highway who drove a few hours to find me. We had lunch, shared stores, and had communion (proposed by him).

Preacher friend visited me on the highway. We had lunch together.

At a gas station, I filled my cooking gas container for 37 cents. The workers were shocked about this style of cooking and transport system for the fuel.

I finally hit flat land in this part of Oregon heading towards Harrisburg, OR. This was awesome. I cruised sometimes at 17 mph. It was nice to have flat road for a change.

I found a huge church off the highway, in Harrisburg, OR, that offered parking spaces for RV campers and even an attached hotel. The elders/founders of this church were very smart! What a great income generating idea and the campers and visitors can come to church too!

On Day 6, I spent at the hotel of this church. It is where I would spend my day off doing video editing, admin, typing this blog, laundry, and other administrative and practical things to get ready for my next leg towards Eugene. Their laundry room has washer and dryer and change machine. Perfect. $1 for wash and $1 for dryer. Everything is done in less than two hours.

dryers for $1
washers for $1
Helpful hints
This was helpful because who has a lot of quarters?

HARRISBURG, OREGON: I took Day 6 off to edit the video above but I still have files for Days 2 to 5. Got my laundry done today and rested a little bit but it is still 0100 and I am still typing and uploading. It's hard to sleep when you are so excited about everything!

Tomorrow, I will head south towards EUGENE and start turning towards the mountains. This will be the big one. Days 1 to 7, I suspect, are only "warm ups" for the mountains prior to hitting "Sister's Corner."

Note my LIVE TRACKING link at: https://z6z.co/mitchtour I turn this on every morning when I start moving and off when I reach the end of the day.

Biking 56kms on my 56th Birthday